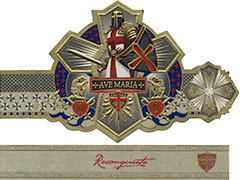 First off, don't let the "price per stick" amount of $2.33 below fool you. I use "cost basis" to value my cigars, and this batch was part of a major cigar supplier's "mea culpa" over their February shipping fiasco. I would never buy these cigars at MSRP or at discounted rates ($50 for 3, $195 for 12). I used a $50 off coupon and basically paid for shipping - hence $2.33 per stick. That out of the way, I must admit the Reconquista gives one heck of a presentation. Even the three-count box is large enough to hold a dozen or more robustos. Inside that box are three coffins for each individual stick. Each coffin is sealed with a label. When one opens the coffin by flipping the top open, the hinge on the coffin causes the cigar to come up out of the coffin. Nice effect. And as with all Ave Maria cigars, this had a great label. I think they put their money in the presentation and boxing. The cigar itself looked and smelled great. The flavor was good, and it produced a lot of good smoke. The draw was perfect for the first third. At the start of the second third the draw became very tight. The tight draw continued, and got only slightly better toward the last third. IT was in the last third that I had to end it early. It started to give me a little buzz, and when I get to that point I quit. It was a strong cigar in my book. I'm glad I bought these with my discount. I can't imagine paying $50 for three of these. If I were going to pay $16-17 per stick, I'd go with one with a little less presentation, and a tad bit more flavor.