BACKGROUND: Today I’m reviewing the Avo 2011 Limited Edition Diadema, which I first featured on the Stogie Fresh 5 podcast in Episode 266 back on Sunday, April 10, 2011. It’s now time for a revisit now that they have been aging in my humidor for 1 year, 7 months. I had only one remaining sample from this batch, which I pulled out for this review.

Avo brand ambassador Avo Uvezian turned 85 in March, 2011 and the Davidoff Company, as they have done each year since 2001, commemorated the milestone with the 2011 limited edition Avo 85th.

The elegant Perfecto-shaped cigar contains a balanced combination of strong and mild tobaccos. The cigars feature a blend of Dominican Piloto Cubano Seco and Ligero and San Vicente tobaccos for the filler. The binder is Pelo de Oro from Peru and the wrapper is a silky Dominican leaf produced by Henke Kelner. 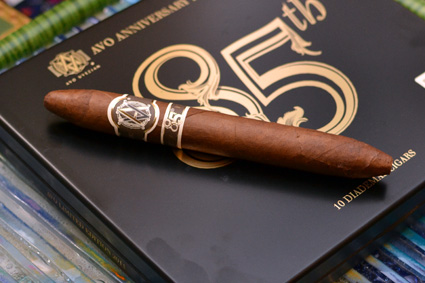 With a narrow distribution of just 10,000 worldwide, this limited edition cigar is packed in a glamorous matte black lacquered wooden box of 10 cigars, with the "Avo 85th Anniversary" logo printed in gold on the lid. 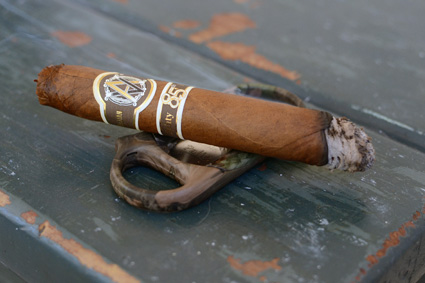 TASTING NOTES: After well over a year in my humidor, the Avo 85th is still showing plenty of character. The cigar starts with toasty cedar and grass on the palate and with fragrant oak and a touch of vanilla on the retrohale. A year ago, this cigar displayed a searing white pepper spice on the retrohale. This characteristic was fairly subdued this time around and the pepper was less noticeable, replaced by a warm and luxurious spice.

For a lighter-bodied cigar this stick had a fairly long finish. Flavors of oak wood and an earthy undertone laid on my palate like flypaper.

A slightly off-centered ligero tobacco led to a small tunnel and a wayward burn line during the first inch. The burn line got far enough out of whack that I had to touch up one edge with my lighter. Because of the discontinuity of the burn, the medium gray ash stayed flaky, causing me to tap off early and often. The draw was slightly stiff and yet inconsistent, most likely due to the tunnel in the filler of the cigar. 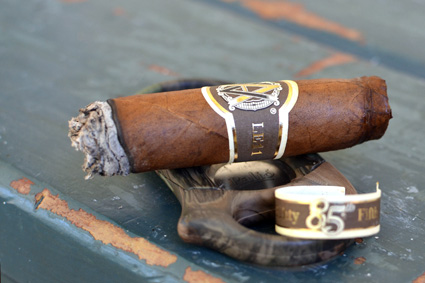 FINAL THOUGHTS: In my review from a year ago, here's how I summed up the Avo 85th: "With a few of these sticks under my belt, I can say that this is one of my favorite limited editions from Avo, but it is probably not a good candidate for long-term aging." I concur with that early assessment. While this is still a very tasty smoke, the subtle changes in flavor and body profile are demonstrating that this cigar will be best enjoyed within the first 2-3 years.

Overall the Avo 85th is medium in both body and strength and medium-full in flavor. I can recommend this cigar to a wide range of smoker preferences, but the $15-17 per stick price tag will likely be a deal breaker for some smokers.

These Avo 85th anniversary cigars come in a box of 10 cigars and each cigar is individually cellophane wrapped. I have left the cello intact and the cigars in their original box within my Aristocrat M+ cabinet humidor. The active humidification system is set at 68%RH and the temperature remains between 66-71 degrees F. This is the first of two podcast reviews. The cigars have been resting in the Stogie Fresh humidors for 1 year, 7 months.