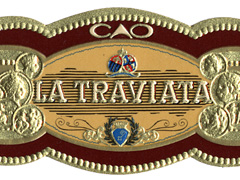 I have the Radiante (Toro) sitting in my humidor, but was gifted this Devino (Robusto), and thought I would try this one first, as I find cigars with a Cameroon binder to be on the strong side. Adding to the strength it's supposed to have two different ligero fillers, one from Nicarauaga and Dominican Republic It has a nice barnyard pre-light aroma. The wrapper is very oily, and shiny. This cigar 'looks' good, but I have been fooled by that many times. Right off the bat, I'm pummeled by pepper. Caused a few sneezing attacks. Less then an inch in the pepper settles down, and I get a predominant nutty flavour which is delicious. Every now and then I get some strong leather added in. I like leather in my sticks, but in this case I wish it wasn't. The nutty flavour is that good. The flavour is consistent from start to finish. On the whole I found the cigar quite dry, despite reviews of it having a creaminess. Usually when I have Jack Daniels with a cigar it enhances any creamy flavours, but it just wasn't there for me. I also did get some ammonia from it, but not enough to take away from my overall enjoyment. The ash was also very flaky, not taking much to jar the ash off, or chunks to flake off. It's labeled as strong in strength, and I would agree. By the half way point I was feeling it, and really took my time on the second half. I would have liked to nub it, but was feeling overwhelmed. Glad I didn't reach for the larger Radiante stick. A very good cigar, that I would recommend, but maybe not for someone new, unless you're prepared to not smoke the whole thing.