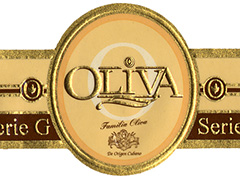 This is my second of three Oliva Serie G reviews. Last time I reviewed a parejo vitola with a Cameroon wrapper. This one is a box-pressed torpedo with a Maduro wrapper. Pre-Light Observations The wrapper is a solid maduro brown and it smells just like farm fresh pile of compost. The cigar is packed tight, and I had to clip it multiple times before I got it to a point where the draw was acceptable. Tasting Notes As with the previous cigar, this one starts off with alot of flavor. The flavors are pretty similar, but the pepper and spice is not as hot. I am also not noticing the mint that I picked up before, but the tangy flavor is there. Overall, the cigars are tasting very similar, but I think that the maduro is milder. About half-way in the flavors turn noticeably earthier. The spice is stronger on the retrohale now as well. The rest of the cigar remained about the same. The flavors remained darker and earthier, and most of the flavors from the first half disappeared. Conclusions Compared to the first Serie G that I smoked, the Maduro was milder overall with an earthier flavor profile. In both cigars, the first and second halves were different smoking experiences, and I enjoyed the first half more. The maduro was a bit too earthy for my preferences, but it was an okay smoke. I didn't experience any real burn problems and only needed to correct one time. The draw was a bit tight however.