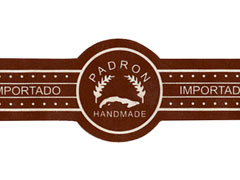 These look a little rough - veiny, crooked caps, maybe lumpy - but the taste & performance way overshadow the appearance. The mildly box pressed shape fits the rest of the appearance, too. As stated the cap was crooked but cut cleanly. The draw was dead on and the pre-light aroma was woody and had that "barnyard" twang. It burned great until a little past mid-way when it needed a little touch up. The smoke volume was significant and smelled great. The ash was gray and held on for the first half of the cigar when it was tapped off so as not to make a mess on the floor. The first draws had a lot of pepper through the nose and the flavor was coffee, wood, tobacco and spice. It burned cool right to the nub. The flavors mellowed a bit in the middle and the strength was on the high side of medium, nut no by much. These are cool cigars - they look like you just pulled it out of your back pocket - and maybe sat on it - but the flavor quality and performance are great. While I really like 1926 80th anniversary edition, I'd have to have 7 of these in place of that one expensive stick.