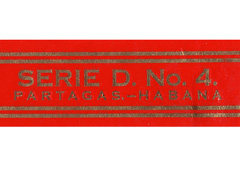 Pre-Light Observations This is only my second time smoking a Cuban cigar, and I picked up this cigar recently at the Havana Humidor in Atlantis (Bahamas). To start with, the cigar looks very well constructed. There are not any blemishes on the wrapper, which is a light brown, almost tan color, and the cigar feels firmly packed through-out and has minor veins. The wrapper gives off a grassy smell, and the pre-light draw is sweet and spicy almost like cinnamon. The draw is smooth and easy. Tasting Notes The cigar starts off with several different great flavors. There's the sweet spice from the pre-light and also a smooth vanilla flavor with hints of orange peel. The cigar leaves a lingering coffee and roasted nut flavor at the back of the mouth and in the nose. I'm really enjoying this cigar so far! About half-way through, the flavor is not as sweet and is more leathery. I'm also getting a bit more pepper in the retrohale; although, overall the cigar has been on the mild side. The cigar has burned well so far, and the ash has held for well over an inch and is a light gray. Smoke volume is a little on the light side. In the final fourth of the cigar, the spice ramped up and actually began to numb my mouth. I could also begin to feel the strength of the cigar, but the cigar ended before it really had a chance to kick in. Conclusions Overall, the Partagas Serie D. No. 4 was a good smoke, and I don't really have anything negative to say about it. It tasted great, burned well, and provided a steady diet of spice through-out. The flavors were varied but fairly consistent for the entire cigar. However, I don't feel it was worth the $21 that I paid for it, and I've certainly smoked many non-Cuban cigars for less than $10 that were just as good or better. It's hard to knock a good cigar smoking experience though so I wouldn't dissuade anyone from giving one of these a try.