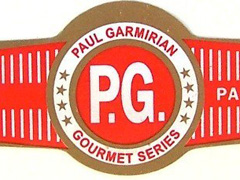 BACKGROUND: I first featured the PG Gourmet Series Lonsdale on the Stogie Fresh 5 podcast in Episode 181 on Sunday, August 9, 2009. These cigars have spent a total of 2 years, 3 months in my humidor and I pulled out a pair this week to give them a revisit.

Paul Garmirian was an academic for many years. He earned his Ph.D. in International Politics from the Catholic University of America in Washington and he then lectured on Politics and International Marketing and managed his real estate firm in McLean Virginia until 1990. But his real passion was in the enjoyment of fine cigars. Garmirian’s interest in cigars led to his 7 years of researching and 2 years of writing the Gourmet Guide To Cigars, a book that was originally published in 1990.

The publication of his book resulted in the opportunity to work with Hendrik Kelner, President of Tabadom and Eladio Diaz his chief blender in Santiago, Dominican Republic. What followed was experimentation and hard work that eventually led to the first P.G. cigars, which were officially released nationwide on May 1st 1991.

P.G. cigars have earned their reputation predominantly by word of mouth and they have come to be appreciated for their balanced blend and smooth flavors and aromas. They are made in the Occidental cigar factory in Santiago, Dominican Republic. Today's featured cigar is the 6.5-inch by 42 RG Gourmet Series Lonsdale.

From what I've read, Garmirian keeps his cigars in aging rooms for a year after he receives them from the factory. What I wasn't able to glean was whether they age the freshly made cigars in the factory first and then ship to Garmirian who then ages them further, or whether they roll the cigars and send to Garmirian freshly rolled for him to age. If I had to guess, I would say that they probably age the freshly rolled cigars at the factory for 2-3 months and then send to Garmirian who then gives them his preferred extended aging. Whatever is the case; the PG cigars are aged a lot longer than many cigars after they have been manufactured and before being shipped to retailers.

TASTING NOTES: This cigar always comes out of the gate with a grassy bite that wakes up your palate. This is a light-bodied cigar that displays flavors of fresh cut hay and raw nuts. The retrohale is yeasty in character and the cigar sports a slightly salty finish.

I can say that the performance of these sticks has been consistently great. I've smoked a dozen of these sticks from this batch and every single one has burned even, has cast a light gray ash that was well formed, and displayed a complexity of flavors and nuances.

This is an easy cigar to retrohale, by the way and I recommend that you retrohale good doses of the smoke so you can see what other flavors and nuances are presented when you bring retronasal olfaction to bear on the smoking experience.

The Paul Garmirian Gourmet Series is nothing if not refined and complex. As I smoked into the second half, the cigar developed more intense flavors, with fresh grass, light aromatic wood, a bit of tobacco sweetness, and a smoky spice on the retrohale.

I also have to mention again that these cigars have now spent 2 years and 3 months in my humidor. The surprising thing is that, at that age, many light to medium bodied cigars would not have the substantial flavors that this cigar possesses. So, I have to say that this cigar is aging very well for a lighter-bodied smoke.

The Paul Garmirian Gourmet Series Lonsdale is a fine smoking experience. With rock solid smoking performance and a host of delicate flavors, I recommend this as a fine morning smoke, or a first smoke of the day smoke. This is a light to medium bodied cigar that won't scare away the novice cigar smoker and will delight the senses of those who prefer complex and refined smokes.

I think this is a perfect cigar for a novice cigar enthusiast with the only drawback being the price. At around $7.75 per stick, this may put off some consumers who really should try this cigar. I still recommend that you give these a try.

These cigars have rested in their original box and kept within my Aristocrat cabinet humidor. The humidor humidity is set at 68%RH and the summer temperatures have been between 68-74°F.

This is the second and final review of these cigars. They have been aging in my humidor for a total of 2 years, 3 months.