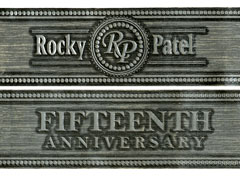 BACKGROUND: This postscript review is on the Rocky Patel 15th Anniversary Torpedo. This cigar was first featured on the Stogie Fresh 5 podcast in Episode 272 on Sunday, May 22, 2011. These cigar have had a nice long rest prior to this review: 1 year and 11 months precisely. This past week, I sat down with a couple of samples and over the course of a couple days I proceeded to revisit this cigar. 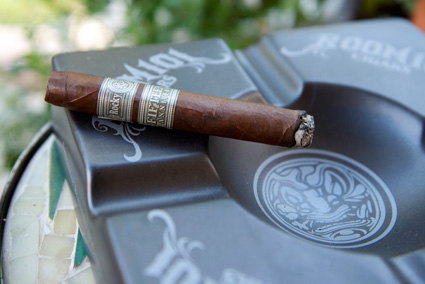 The 15th anniversary was a milestone for Rocky Patel, who just keeps churning along like a runaway train. Rocky likes to tell people that no one in the cigar industry thought he would last ten years in the business. And yet, as of 2012 he's achieved his 16th anniversary and is still going strong. Rocky Patel’s intense passion, and work ethic have catapulted him to the top echelon of the cigar universe.

The Fifteenth Anniversary by Rocky Patel cigar is a box-pressed cigar that's wrapped in an Ecuadorian Habano leaf and with the binder and filler tobaccos coming entirely from Nicaragua.

The cigar comes in four sizes, all of them packed in boxes of 20. The black boxes are adorned with metallic plates on the front and lid, and the double bands resemble gunmetal sheets.

The cigar I’m featuring today is the 6.1-inch by 52 ring gauge Torpedo. 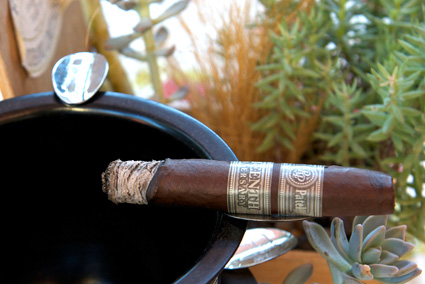 TASTING NOTES: After sitting in their original box in my humidor for nearly 2-years, these sticks came out of the gate with plenty left over in the tank. There was some initial sweetness on the palate followed by fresh hops and cedar. The retrohale added more aromatic cedar and a sprinkle of vanilla bean.

Though the burn line was a bit ragged, the draw was just the way I like it: smooth with a slight bit of resistance. The medium-gray ash was kind of flaky, which led me to tap off in 1/2-inch chunks.

A year ago this cigar was much more complex during the first half, with notes of bourbon and cocoa and with pepper spice and oak wood on the retrohale. This time around there was a narrower flavor profile and the flavors seemed more subdued. Nevertheless, the cigar still displayed some solidly good flavors and some nuanced flavors as well. 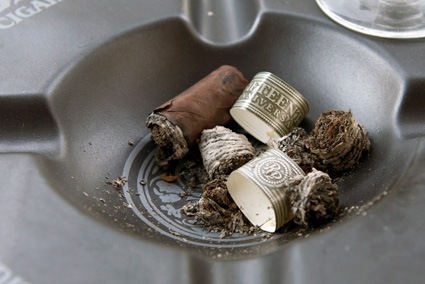 FINAL THOUGHTS: Overall, the Rocky Patel 15th Anniversary is a solid smoke with a good range of flavors and with excellent construction and burn. When I compare this smoke with my experience a year ago, I have to say that it is not as impressive. Nevertheless, if I was smoking this cigar for the first time, with nothing to compare it with, I would say that it was a fine smoke and one that I would purchase again. On the other hand, after a year in my humidor and after looking over my notes from a year ago, I can tell that this smoke does not have the same punch nor does it have the well-defined range of complexity that it had when it was younger.

I still believe that this is a fine smoke and I don't hesitate to recommend this cigar to a wide range of cigar smokers. But once again, the price may be a sticking point to some. At just under $10 per stick, I believe this is a fair price for a special edition offering, but only you can decide what your pocketbook can manage.