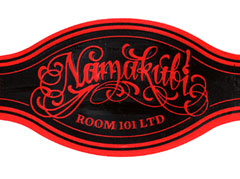 BACKGROUND: Matt Booth, brand owner of Room 101 cigars, has told me that he derives special pleasure in naming his cigars with names that are not easily pronounced. Well he hit that one in spades with this week’s featured stick. This stogie has been called such names as the Namabuki, the Yukanuba and the Nakatumi Towers. I kid you not. This week I’ll be introducing the newest installment of the Room 101 LTD series named the Namakubi Edition. You got that?! Namakubi baby.

And what’s more, it seems that the name of this cigar has its roots in the ancient Samurai culture. In ancient times when two Samurai clans would gather for competition there was a great deal at stake. Normally, the losing party would die as a result of wounds sustained in battle or be executed upon defeat. The Namakubi, or freshly severed head of the losing party would be prepared on a wooden tray then tagged in a regimented manner and presented to the leader of the winning clan as a gift. Jeez, I guess that takes “giving head” to a new level.

The Room 101 LTD Namakubi Limited Edition is the second limited edition smoke from Room 101. (You may remember that the first one was called the Conjura Edition.) The cigars are comprised of Dominican and Honduran filler blend, a Honduran binder and an Ecuadorian Habano wrapper.

The cigars come in five sizes, including one with a 60 ring gauge and another a diminutive 4 inches by 42 ring gauge. They retail for $6 to $10 each and production is limited to just 1,000 boxes per size and a total production of 100,000 cigars. The Namakubi comes packed 20 to the box, except for the Papi Chulo, which comes in a 50-count cabinetta style box.

TASTING NOTES: The Namakubi Tiburon starts out very light in body, flavor and strength. There is a slight bit of spice and a tangy sweetness at the outset, but certainly a slow starter. After the first inch, the cigar ramps up in intensity. I noted wood, medium roast coffee and perhaps some tropical fruit flavors.

The draw and burn were near perfect on this stick, which sported a razor sharp burn line and a fairly flaky medium gray ash.

This is an interesting cigar from Room 101. It is the lightest in body and strength of any of their cigars, but is also the most complex. It also has a unique flavor profile, definitely not a knockoff of any other cigar in the market.

FINAL THOUGHTS: The Room 101 Namakubi Edition Tiburon is priced at less than $7 per stick, which makes this a must try cigar. You will find the Namakubi to be medium in body and strength and medium-full in flavor. This is the most complex cigar from Room 101 to date. It brings forth a plethora of nuanced flavors that keep you guessing what will come next.

The Namakubi is one of my favorites from Room 101 because it is such a versatile smoke. I can smoke this cigar any time of day and pair it with almost any libation. From a morning coffee to an evening Scotch and everything in between, the Namakubi will surely appeal to a large segment of cigar smokers.

If you can pronounce it, er, I mean if you can find these limited edition smokes, be sure to give them a try. 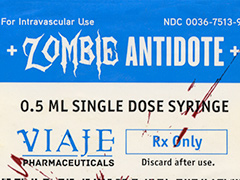