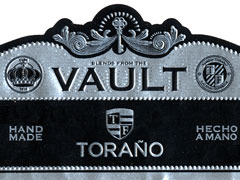 BACKGROUND: I first featured the Toraño Vault A-008 in Episode 297 of the Stogie Fresh 5 podcast back on Sunday, December 11, 2011. Now, after over a year of extra age, I pulled out my last two sticks for this postscript review. These cigars have been resting in my humidor for a total of 1 year, 3 months and 17 days.

Since 1982, the Toraño family has kept a notebook of every single blend they have ever worked on. Among the blends recorded in this book are those that were released by the family, together with those that were deemed to have tremendous potential, but not yet ready for prime time.

This book is a legacy of the Toraño's blending expertise and is now kept in a safety deposit box in a bank vault. Hence the name: Vault.

The Vault represented a previously unreleased blend called Liga A-008, which was first documented in the year 2000. The original Blend A-008 consisted of a shade grown Nicaraguan Colorado wrapper and filler tobaccos from Estelí and Condega. The binder was a Honduran leaf from the Jamastrán Valley. 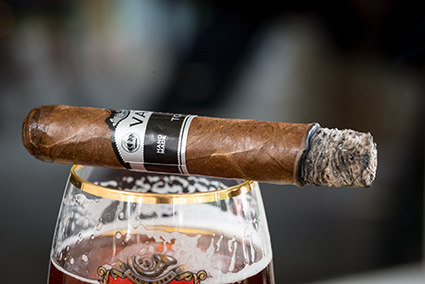 Because they thought blend A-008 had so much potential, the Toraño family recreated the blend and tweaked it until they discovered that the missing ingredient was tobacco grown in a region that the Toraño family did not have access to until recently.

That region is Ometepe, Nicaragua. The addition of a second ligero binder from Ometepe gave the blend the characteristics that it needed to be released as a production cigar under the Toraño name.

The Toraño Vault A-008 is available in 4 sizes. The cigar I'm revisiting is the 5-inch by 52 ring gauge Robusto.

TASTING NOTES: This cigar was impressive. It started with blackstrap molasses, corn mash and the sweetness of bourbon. It was woody and spicy and full in flavor. The impact on the palate was huge. The flavors coated my palate and the smoke had a long and satisfying finish.

The retrohale kicked it up a couple of notches with a searing pepper spice that threatened to launch my nasal mucosa into the next county. Warning: retrohale this cigar at your own risk... 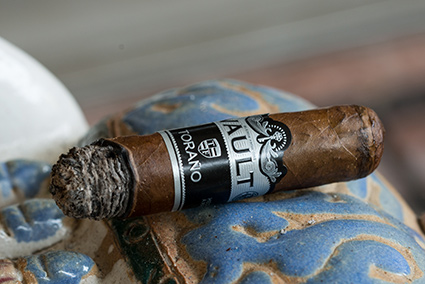 The performance was also stellar. The cigar exhibited an even burn line and excellent draw. The ash was slightly flaky, but nothing to write home about.

FINAL THOUGHTS: The Toraño Vault A-008 is a solid smoke at a fair price. You will find that the Vault, like all Toraño cigars, is well made and is a pleasure to smoke.

This is a straightforward smoke. It has a narrow range of flavors and is not overly complex, but a wide range of cigar smokers will likely enjoy its flavor and body profile. This cigar is medium-full in body, flavor and strength and the extra age has been kind. This stick still packs plenty of punch and at a great price point is a fine candidate for an everyday smoke.

These cigar have been stored in a singles drawer inside my Aristocrat Mini cabinet humidor. The active control system is set at 68%RH and the temperatures range between 65-70°F.

This is the second and final review of these cigars, which have been aging in my humidor for a total of 1 year, 3 months and 17 days.