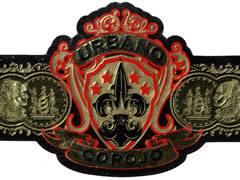 BACKGROUND: I first featured the Urbano Corojo Torpedo in Episode 271 of the Stogie Fresh 5 podcast back on Sunday, May 15, 2011. These cigars have now been aging in my Aristocrat Mini Cabinet humidor for 1 year, 7.9 months and I pulled out my last two samples for this review.

Two years ago I came across the Urbano brand of cigars and I was pleasantly surprised. I am always on the lookout for new boutique cigars that bring something new and exciting to the cigar smoker. I felt that Urbano represented another bright star in the constellation of boutique cigar brands. Owner Matt Urbano is a former executive chef who's passion for cigars began 20 plus years ago while working in the restaurant industry. Matt has always had a passion for rich flavors and complex textures in food and he has extended that same quest for perfection into the world of cigars. 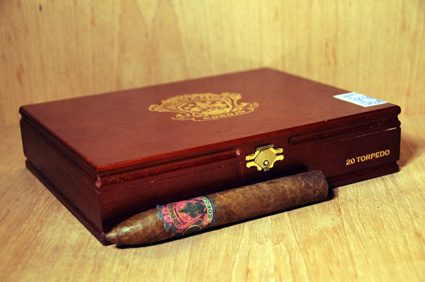 Urbano came into the cigar business after meeting one of his neighbors in Tampa who turned out to be a master cigar blender. Collaborating with his new friend, he put his own palate to work and teamed up with this cigar master to create a new line of cigars.

The Urbano Corojo is the strongest of three lines of Urbano cigars. It is a Dominican Puro, meaning that all tobaccos—filler, binder and wrapper—come from the Dominican Republic.

The Urbano Corojo is blended with tobaccos that have been triple fermented and then aged for 3 years. 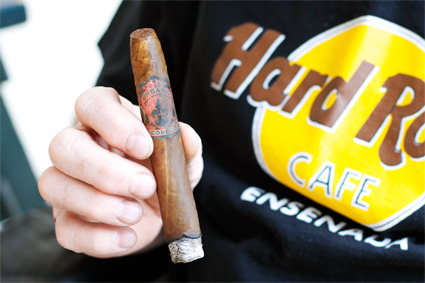 The Corojo comes packaged in boxes of 20 cigars. This week’s postscript review is on the 6-inch by 50 ring gauge Corojo Torpedo.

TASTING NOTES: Though the Corojo is the fullest in body and strength of the Urbano portfolio, at 1 year and 8 months of age, the Urbano Corojo has mellowed considerably.

The flavors presented with a little bit of spice, some earthy or wild honey-like sweetness and some wood notes on the palate.

A year ago, when I reviewed this cigar for the first time, it was fuller on the palate and spicier on the retrohale. I looked over my notes from the last review and saw that I noted real good complexity with the cigar at that time. However, this time around the cigar didn't change much during the smoke and didn't have nearly the complexity or balance. The good news is that, even though the cigar is pretty straightforward in flavor profile, the flavors are very pleasant, all the way through. There is something to be said for a straight forward flavor profile, especially when compared to a cigar that changes during the smoke, but when those changes take a turn for the worse.

Nevertheless, it is still showing some good flavors, especially on the retrohale.

The draw was smooth and effortless, the burn was just about dead even and the ash was dense and well formed.

FINAL THOUGHTS: Because this cigar has mellowed so rapidly with extra aging, I would say that this blend will show its best characteristics during the first couple of years after purchase. The Urbano Corojo Torpedo did not impress me as much as it did a year ago, but it is still a good smoke that displays a consistent flavor profile throughout the smoke that is pleasant and satisfying.

I did notice that in the final third the cigar developed more concentrated flavors, but started to display some bitterness that purging did not really help. So, I terminated the smoke a bit prematurely...

The way it is smoking right now, I would recommend you pair this with your morning coffee and/or with one of your favorite blended whiskeys.

These cigars have been kept in a plastic cigar bag on one of the shelves of my Aristocrat M+ cabinet humidor. Each cigar came with an extra protective cellophane cover, but I did not have a separate box to store them in, thus the secondary protective plastic bag.

The cabinet humidor has an active humidification system set at 68%RH and the temperatures are ranging between 66° in midmorning to 70°F in the evening.

This is the second of two podcast reviews on this batch of sticks, which have been aging for 1 year, 8 months and 1 day.